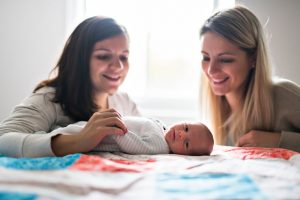 Researchers from the Eugin Group have presented the data of a study in which the assisted reproduction ROPA technique (Reception of oocytes from the partner) in female couples seems to have higher success rates than conventional IVF (in vitro fertilization), in which the pregnant woman provides the egg as well.

The ROPA technique makes it possible to include the two members of the couple in the process of having a baby, since both are involved in the treatment: one contributes her eggs and the other carries the baby. But added to this advantage is the fact that it results in a higher live birth rate, according to the Eugin Group study, which was presented today at the 35th annual congress of the European Society of Human Reproduction and Embryology (ESHRE), held in Vienna.

In their study at Eugin Clinic Barcelona , the researchers compared the results of the first assisted reproduction cycle of 70 female couples who had opted for the ROPA technique in order to achieve motherhood with another 140 couples who had undergone IVF. Both groups of couples were of a similar age and the same number of embryos was transferred, which were also similar in quality.

“When we considered the study, we thought that the results of the ROPA technique would be similar to those of conventional IVF; we did not expect to find such high success rates with ROPA”, explains Dr. Désirée García, co-author of the study.

The advantage of sharing the treatment

In their conclusions, the authors of the study provide an explanation for the better results in favour of ROPA. In the case of ROPA, the pregnant woman undergoes a treatment to prepare her uterus, but does not undergo the previous hormonal stimulation needed to obtain the eggs, which allows her uterus to face the implantation and embryo pregnancy under better conditions.

“Our study serves to endorse the ROPA technique, but that does not mean that the other methods, such as conventional IVF, are not valid. In fact, the ROPA technique cannot be offered in all cases”, says García. In this regard, the researcher argues that reproduction techniques should be offered depending on each case, according to the biological characteristics, medical history and circumstances of the members of the couple, since there is not always an option to choose between one technique or another. “The study goes to show that, in women who can choose, ROPA is a perfectly valid and successful option,” she concludes.

The ROPA technique has now been practised for many years in our country, although it is not covered by Social Security and requires both women to be married. The procedure is now commonly acknowledged as a widespread option among lesbian women who want to be mothers and as an alternative to other more conventional techniques, such as artificial insemination or in vitro fertilization, in which the treatment is undergone by just one of the women using her own eggs.